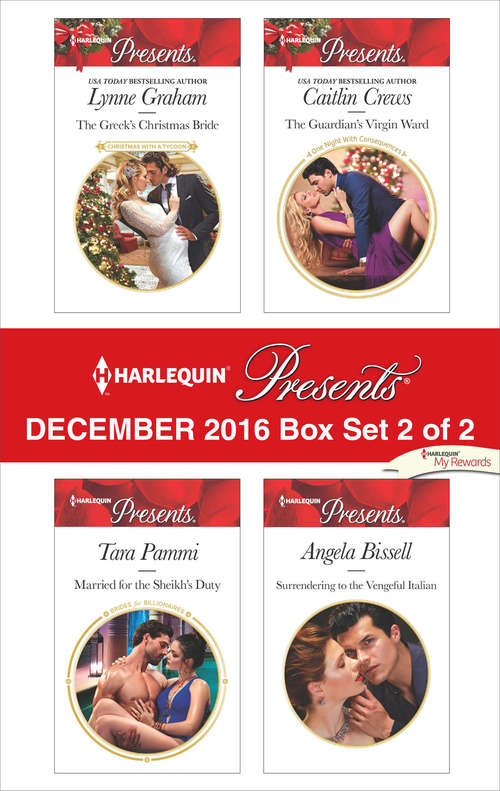 By: Lynne Graham and Caitlin Crews and Tara Pammi and Angela Bissell

Synopsis
Harlequin® Presents brings you a collection of four new titles! This Presents box set includes: THE GREEK'S CHRISTMAS BRIDE Christmas with a Tycoon by Lynne GrahamThe conditions of cynical bachelor Apollo Metraxis's inheritance force him to marry! Pixie Robinson's debts leave her defenseless--but her untouched vulnerability on their wedding night strikes a chord in Apollo's cynical heart. And then he discovers that she's carrying two Metraxis heirs! MARRIED FOR THE SHEIKH'S DUTYBrides for Billionairesby Tara PammiSheikh Zayn Al-Ghamdi's reputation has already been damaged by scandal--so when Amalia Christensen blackmails him, he has to make her his temporary fiancée! But Amalia unleashes a hunger in Zayn that tempts him to take their relationship from business to bedroom... THE GUARDIAN'S VIRGIN WARD One Night With Consequencesby Caitlin CrewsDomineering Spaniard Izar Agustin couldn't have imagined that his ward, innocent Liliana Girard Brooks, would become such an alluring woman. One night of sensual abandon shows Liliana the unconscious desires of her body... But the consequences of that night bind them together...forever! SURRENDERING TO THE VENGEFUL ITALIANIrresistible Mediterranean Tycoons by Angela BissellNot even his foe's stunning daughter, Helena Shaw, will halt Leonardo Vincenti's vengeance. Leo knows that Helena would never willingly return to his side, so he blackmails her. But the passion that undid them before soon forces them both to the brink of surrender... Be sure to collect Harlequin® Presents' December 2016 Box set 1 of 2! Join HarlequinMyRewards.com to earn FREE books and more. Earn points for all your Harlequin purchases from wherever you shop.